Even for those of you who didn’t watch the Grand Prix at Olympia, I’m sure you will have heard about the drama at some point today!

Bertram Allen is a 20 year old who was riding his fully clipped horse Quiet Easy. Their jump off was breath taking! I couldn’t believe how quick and tight they were around the corners. I had no doubt in my mind that he deserved to win. Especially when top riders started making costly mistakes trying to catch his time of 30.45 seconds. Michael Whitaker got the closest with 32.05. However, Bertram was disqualified after a stewards inspection due to a welfare issue, passing the win to Michael.

I think it is great that the sport has a rule that any blood seen on the flank, mouth or nose, or marks from excessive use of spurs/whip is an automatic disqualification as it prevents riders getting too caught up in the moment and pushing their horses too hard. However, I can’t help feeling gutted for Bertram and thinking that maybe the rules need to be reconsidered in some way.

Something interesting I noticed this year at Olympia is the random square patches left intact on fully clipped horses, as shown below, just behind the horse’s girth.

My first few glimpses of this patch I think were in the dressage classes and it took me a few sightings to decide whether it was a sweat mark or an unclipped patch, as it is something I haven’t come across before. Once I had decided it was a type of clip, I started thinking about why it was used and the only conclusion I could come to was that it worked some way with the spurs. My first ideas being along the lines that it cushioned the spur for sensitive horses.

After hearing of Bertram’s disqualification and a mention of spur marks, I went back to the footage to see what clip Quiet Easy had. As you can see below, Quiet Easy is fully clipped without these patches.

This made me think that maybe if Quiet Easy had had these patches, Bertram wouldn’t have been disqualified. Which then made me think, maybe horses have patches not for the horses benefit, but for the riders. Meaning that the rider can push harder without risking the spurs leaving a mark. 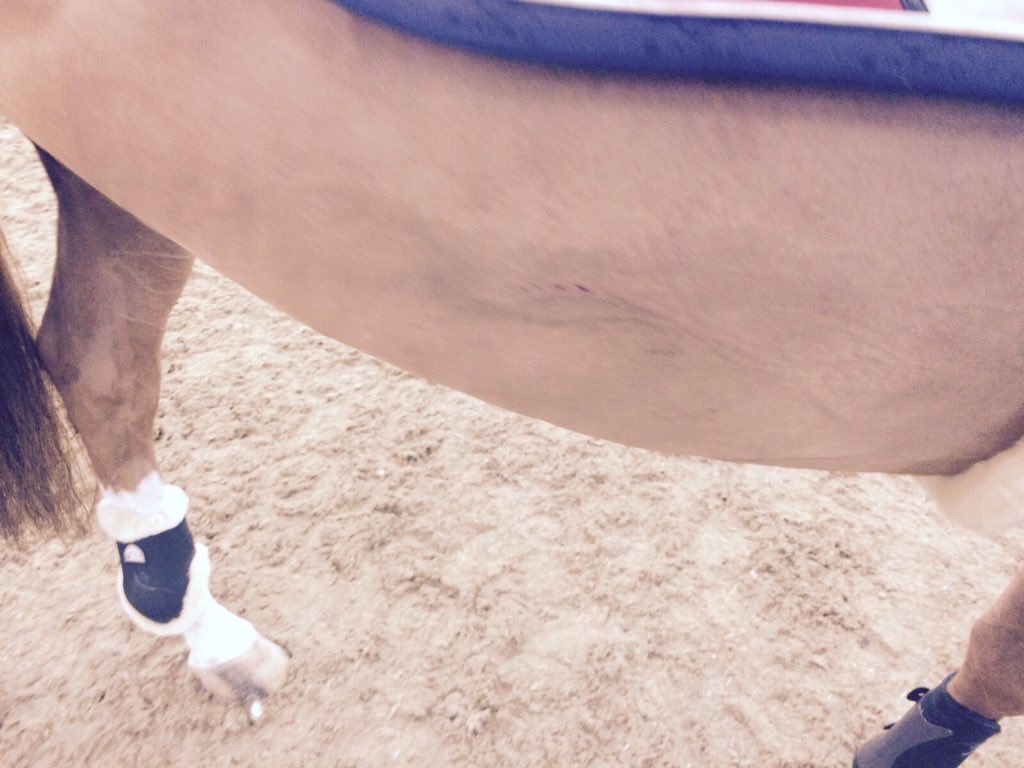 (The marks which disqualified Bertram Allen)

The statement I read was that Quiet Easy had minor spur marks after his round. And to be honest, I probably wouldn’t spot the marks in the photo above if I did’t know they were there… a horse could do more damage scratching against a fence post. However, as much as I believe Bertram deserved to win, I can’t fault or complain about the stewards decision to put welfare first by punishing any evidence of ‘pain’ with disqualification. I’m glad that riders have to consider the horse’s welfare even in top competition. Although it has made me wonder about the clipped patches and I will be keeping an eye out for these in the future, especially when it comes to disqualifications!

Yes, leaving a mark on a horse of any type shows that you have used too much force and it isn’t fair on the horse. However, watch Quiet Easy’s round and tell me that horse didn’t deserve to win. Yes the rider rode too hard, but there is no denying that Quiet Easy was just a cut above the competition. Other riders trying to go that fast (and probably riding just as hard) had stops and poles down because the horses simply couldn’t jump at that speed or from those turns.

I really hope we see the pair again very soon and they have another amazing performance like that, because the horse deserves recognition for his fantastic ability! And so does Bertram, he is an amazing young rider, it is just unlucky about last night. But this can only be a good think for horse welfare.

Watch their jump off here, on the BBC website.

What is your opinion on the stewards decision?