Home » All Posts » Training & Competition » Dressage » Saturday Switch ~ The Thoroughbred that could!

Saturday Switch ~ The Thoroughbred that could!

This is our 3rd post in the Saturday Switch Series and it really is a beautiful one. This post is written by Chelsea from Outside The Box Training and really embodies the spirit of this blog. It tells the story of her journey retraining her spirited ex racehorse and is a fantastic read!

It is becoming far more accepted that the Thoroughbreds and ex racehorses are not to be underestimated however go back a few years and if you turned up to a dressage competition with a little thoroughbred the odds were you would be laughed at, however let me share with you my experience with Oliver, the Thoroughbred ex racehorse that really could!

When it comes to this special little ginger, a magical Thoroughbred who finished his racing career and landed under my bum, I have so much to be grateful to him for, he has made me the rider and trainer I am today.

Oliver was purchased for £1100 straight off the track at an auction in Kent. A large sum of money by today’s standards.

My then trainer, Dean Metcalfe asked if I wanted the grey who was schooling nicely or the crazy little orange that had “something about him” as the words came out of Deans mouth, this little orange was rearing and showing the world his disapproval – the orange it had to be! Back then I had balls of steal and would jump on anything so the rearing didn’t put me off at all, I have always been partial to an orange. I currently have three horses all of which are orange! there really was no other choice. 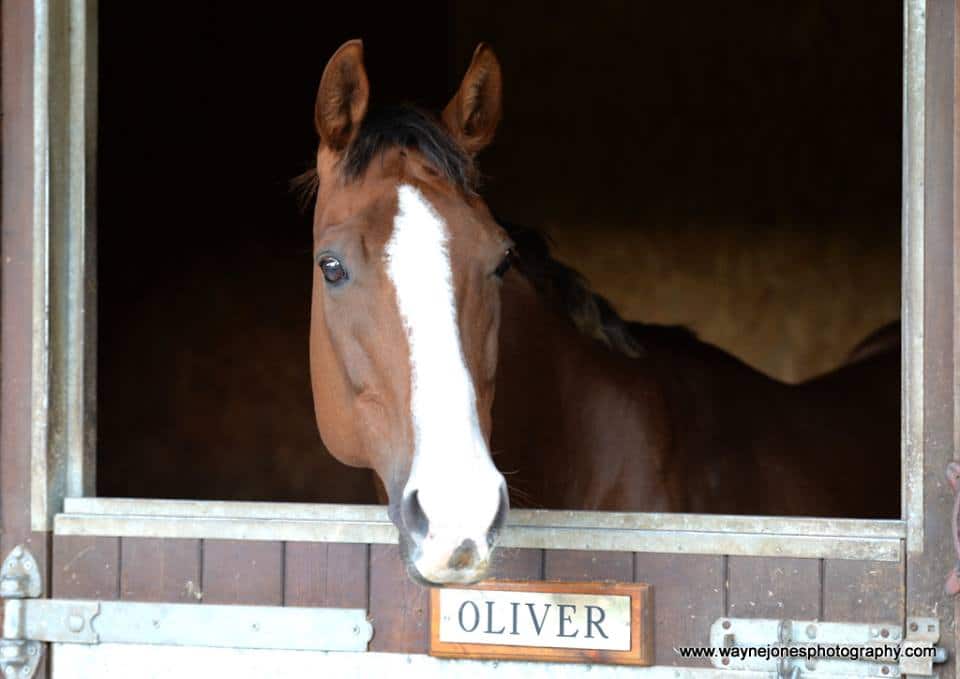 It took us several hours to load him – something I didn’t realise was going to be a recurring factor in our lives. I had hoped because of his somewhat stressful day he may simply of just “got the hump” Wishful thinking…….. He was terrible to load and no amount of training or practice changed that, we even got him his own pony who he adored but even with him waiting in the lorry Oliver did not want to load. Still to this day I have no clue why as he travelled perfectly, it was just the getting on the lorry that was the issue. It didn’t matter what size lorry, side or rear load, we even tried trailers. Always the same, “I don’t want to”

When we got him home he called constantly, this went on for about 3 days. The key to soothing him? Work: he needed to be worked and kept busy. He was at his happiest under saddle. Surprising really considering he had the worst kissing spine Donnington Grove had ever seen. This was what took him away from me in the end. Complete devastation at the sight of the x-rays, not only overlaps and kissing, but holes! Holes where the bones had rubbed away on each other. My poor glorious boy with the heart of a lion kept going for so long without a peep. He had physio and massages and everyone who ever put hands on him complemented how supple he was, how strong, no tight or weak points. It is incredible how the muscle system developed so well his bones through his back were almost not needed.

I believe his ability to work through is a testament to our partnership and the loyalty and work ethic these Thoroughbreds seem to have. I have never before or since had a connection so strong with horse nor human.

Because he was very hot I worked him hard, not only in terms of timescales but the complexities of his training. For the first year we only walked and trotted, his trot was terrible, a straight line was also impossible. I am glad I took the time to establish his trot as we regularly got 9s for it. The trot is what I am now best at developing too, so it did us both the world of good, patience does pay off.

He was around 5 or 6 years old when we taught him to piaffe and passage. Teaching him was brilliant, within two days he had it. Possibly not the best idea I ever had as this then became his party trick and he would use it against me when he got cranky. We bounced a lot! 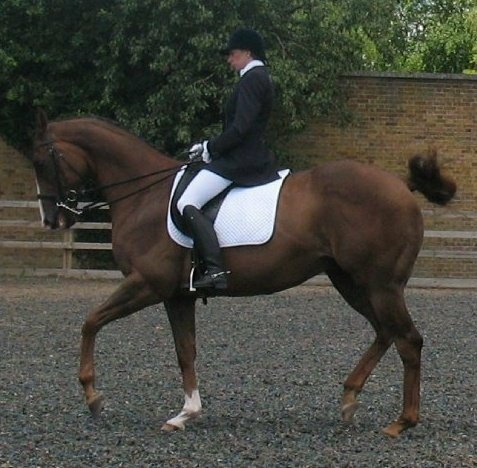 Don’t misunderstand it was not perfect at first, it was explosive to say the least. But he knew the aid and knew what was required from those little legs.

I am lucky to have a good natural feel, which he helped develop, he made me realise how this natural reading ability through feeling, not only physically but energy’s and moods, expressions even. This unlocked a training key that would put all the critics to silence. (There were many)

Until Oliver this non explored tool had never really been something I’d spent any thought on however I realised it could not only influence my next ask but could take the sting out of almost all situations. My understanding of a horse’s body language and the subtle changes which can tell you so much was a new world I simply couldn’t get enough.

When I realised I could have control over not only my own body but every inch of his too. He was the first horse I could pick up a leg and place it exactly where I asked with a simple and quite aid, it was almost secret riding.

Our relationship became so magical over the years we literally spoke to each other via our minds. It was telepathy at its best.
The sensitivity between us was so heightened the smallest of movements spoke volumes. We knew exactly which buttons to push with each other, good and bad. We both knew when the other had had enough or was upset and in need of just a mooch or a good blast.

The trainability of his mind, strength of his body coupled with his stamina and lust for life was a formidable combination.

I felt like the luckiest girl alive sat on him, over the years we did everything, always our focus on the dressage but he needed more than just the arena and dancing. He jumped, not that he had huge scope but he enjoyed a little 2’6 course, we even went hunting a few times. He was incredible on the hunt field, I learnt quickly to keep him at the back and let him get a proper gallop on pulling up just behind the master, we did pass the master one day, I was mortified and told perhaps a happy mouth wasn’t the best option for the next time, hehhhee

He was ridden in a happy mouth straight bar, for years this was all he would accept and I didn’t much care when he tanked off, I just sat and waited for him to come back.

We hacked at least twice a week and both loved our adventures, me with no sense of direction we would get lost and be out for hours enjoying each other’s company and the Berkshire countryside. 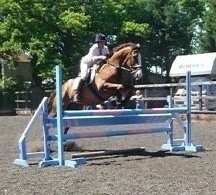 He was the most temperamental but loveable horse I have ever known.  The bond was unbreakable, we really were at one, I could read him without even a look and I am sure it was the same for him. We were two best friends dabbled with everything making us both stronger and wiser.  We always trained, be it on a hack or in the arena we were always learning, mainly because he was so hot tempered when it went wrong! I had to learn to be smarter when the training got harder and quite when he got better.

He wasn’t your typical Dressage horse, back then it was all warmbloods with the big round natural movement and he didn’t have the calm mind-set for the scales of training, it was a little one step forwards and 10 steps back sometimes. Finding a trainer that understood him was fruitless so we did it just me and him.

I took the approach that we would train whatever he could handle on that particular day and on the days he couldn’t or wouldn’t, for whatever reason we just had a wonder or a good old gallop, racehorse style ☺

Learning and training seemed to come so naturally, almost because there was no pressure it was easier somehow, don’t get me wrong there were days when I would get off and want to bang my head against the wall but the days when he was on side was effortless and so rewarding. We learnt to medium trot whilst out hacking up hills. Using his natural approach to opening himself up to go up the hills meant I just needed to install an aid and then refine it in the arena.

When naughty I would put him into half pass to give his mind a focus and his body more controllability, he could rear like no other horse I have ever sat on. He would bronk his heart out when the temper took him.

He taught me that you never ride off emotions, you never punish them because of your frustrations or your brick walls, if you hit a wall and you can’t get over or go the other way, don’t make it a battle it gets you nowhere.

The scales of training didn’t really feature much either but despite our haphazard approach and after 10 years together we had the knowledge and skills to perform all of the Grand Prix movements, in my mind and more importantly in my heart he was and always will be my Grand Prix horse that taught me to “ride”. 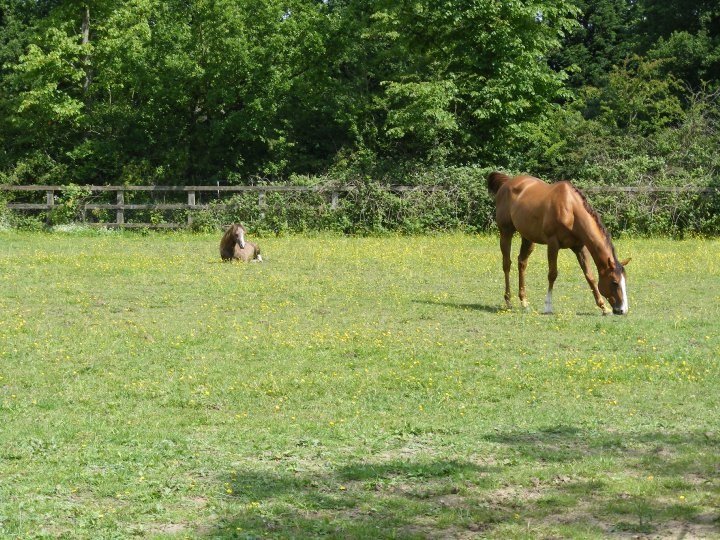