2 years ago Scottie got a new rug for my birthday, the 100g Loveson Allpro turnout plus the detachable hood. Since Scottie was still fairly new to me, it was a cheap option for a rug, in case he turned out to be a rug wrecker. But it has been fantastic! 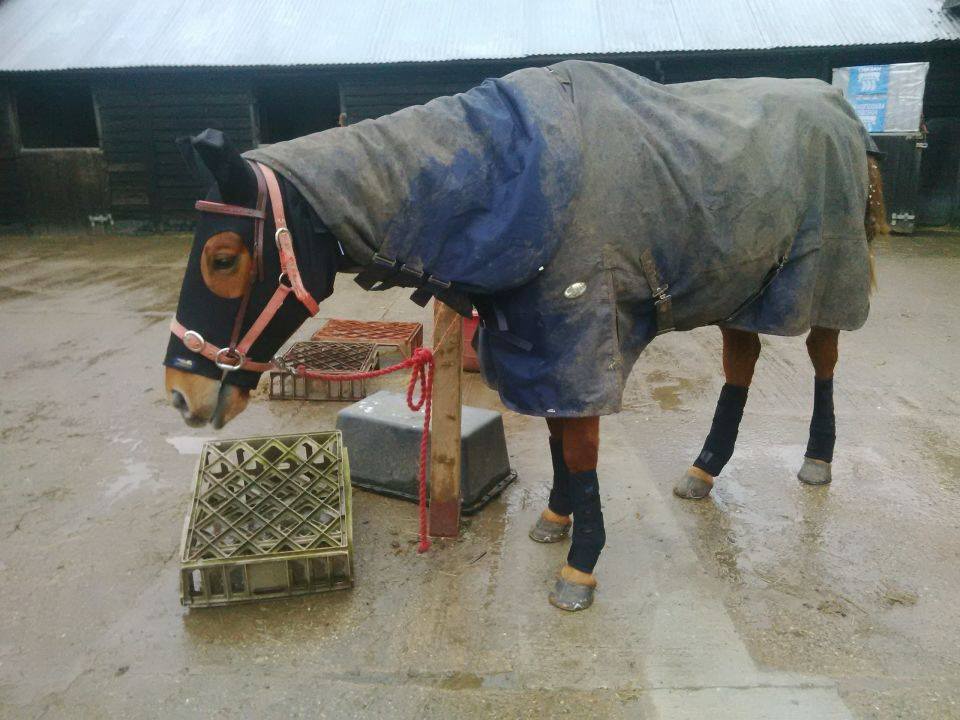 This is Scottie’s 3rd winter in this rug, which he wears virtually all winter and it is still going strong, despite a few mishaps! The first winter a horse bit a chunk out of the bum of this rug, but a quick repair and it was back on and back in the thick mud! This winter the rug has had an even stronger battering, with one of Scottie’s field buddies removing all the attachments on the detachable hood- completely ruining the hood in the process. And then a few days later said pony also removed the tail flap of this rug. (I am not impressed!)

However, despite a few parts of the rug being removed in the field during ‘games’. The actual rug itself has held up very well, especially after some of the rough games it is regularly subjected too! Scottie is still wearing this rug and he is still coming in from the cold and the rain nice and toasty and most importantly dry!

The only negative I have about this rug is that the adjustable straps attaching the hood to the rug aren’t strong enough to keep to how you adjusted them. I would tighten them up in the morning and by the time I bought him in they would have lengthened and allowed the hood to slip further down the neck or flip the back end over. But this wasn’t really a big issue.

I would recommend this rug and if the pony manages to completely destroy it, I think I would probably go out and buy the same rug again! It is very reasonably priced at only about £40 plus maybe £10-£20 for the hood. It’s lasted us very well and if you don’t have a pony intent on ruining your rugs I imagine it would last a very long time! I also think it’s a cheap enough option to be suitable for a rug wrecker.

EquiPepper ·
@TheRubyPepper
Everything You Need To Know About Horse Grooming *Partnered* https://t.co/VO1nXq6q6o https://t.co/ttbWrS5mem
View on Twitter

Cecil has never been poo picking off the lead with Scottie in the field. Today was his first time.

EquiPepper ·
@TheRubyPepper
The C Word ~ How to prevent colic While we can never completely prevent colic in our horses, there are steps we can take to reduce the risk. https://t.co/nLywfwicsw https://t.co/XSHENEaQ29
View on Twitter