Home » All Posts » Our Progress » Highland Rain » Groundwork for Scottie

Yesterday afternoon I decided to have some fun and do some groundwork with Scottie in the school. We got out several bits and pieces and created a bit of a mini handy-pony.

We had two rather scary fillers creating a tunnel at X, two hunter style fillers creating another tunnel down the long side, an L shaped tunnel of poles, 4 weaving cones, another L pole deep in the scary corner and 2 raised planks with scary flame and card designs. 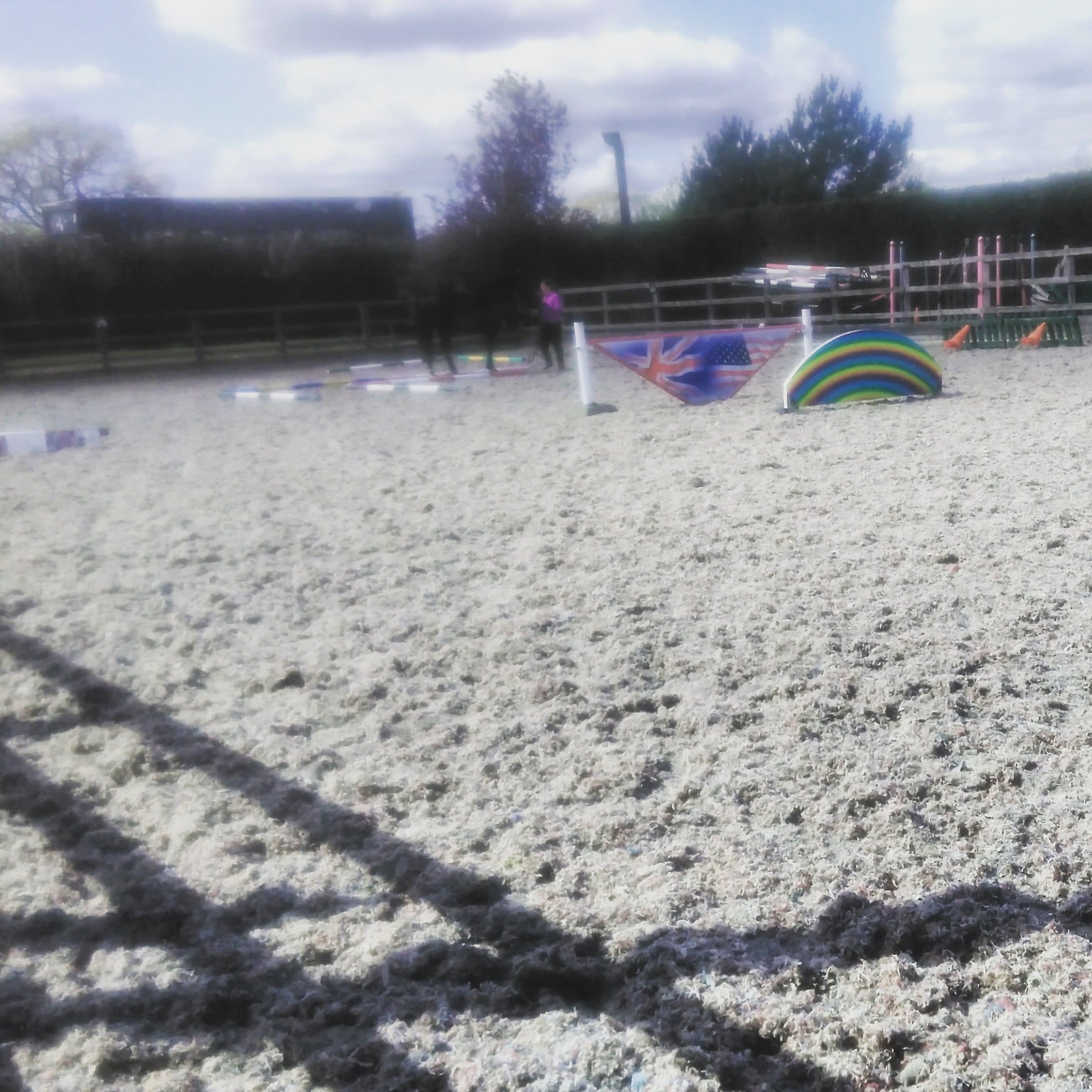 Now Scottie had already had one run in with the scary fillers and it had been rather dramatic! Scottie can also be quite unpredictable in the sense that he is either completely unfazed by something, or it is absolutely terrifying and a massive drama. Unfortunately, you never usually know which Scottie you are going to get until you ask him to do the scary thing.

Because of this, I decided to do the easy things first, letting him follow me through both the L shaped sets of poles and weave in and out the cones. This was completely drama free, so we moved straight onto the hunter style filler tunnel. Once again, there was no drama at all, Scottie didn’t even seem to look at it. So after a few more laps of these non scary obstacles, we moved on to the scary filler tunnel. 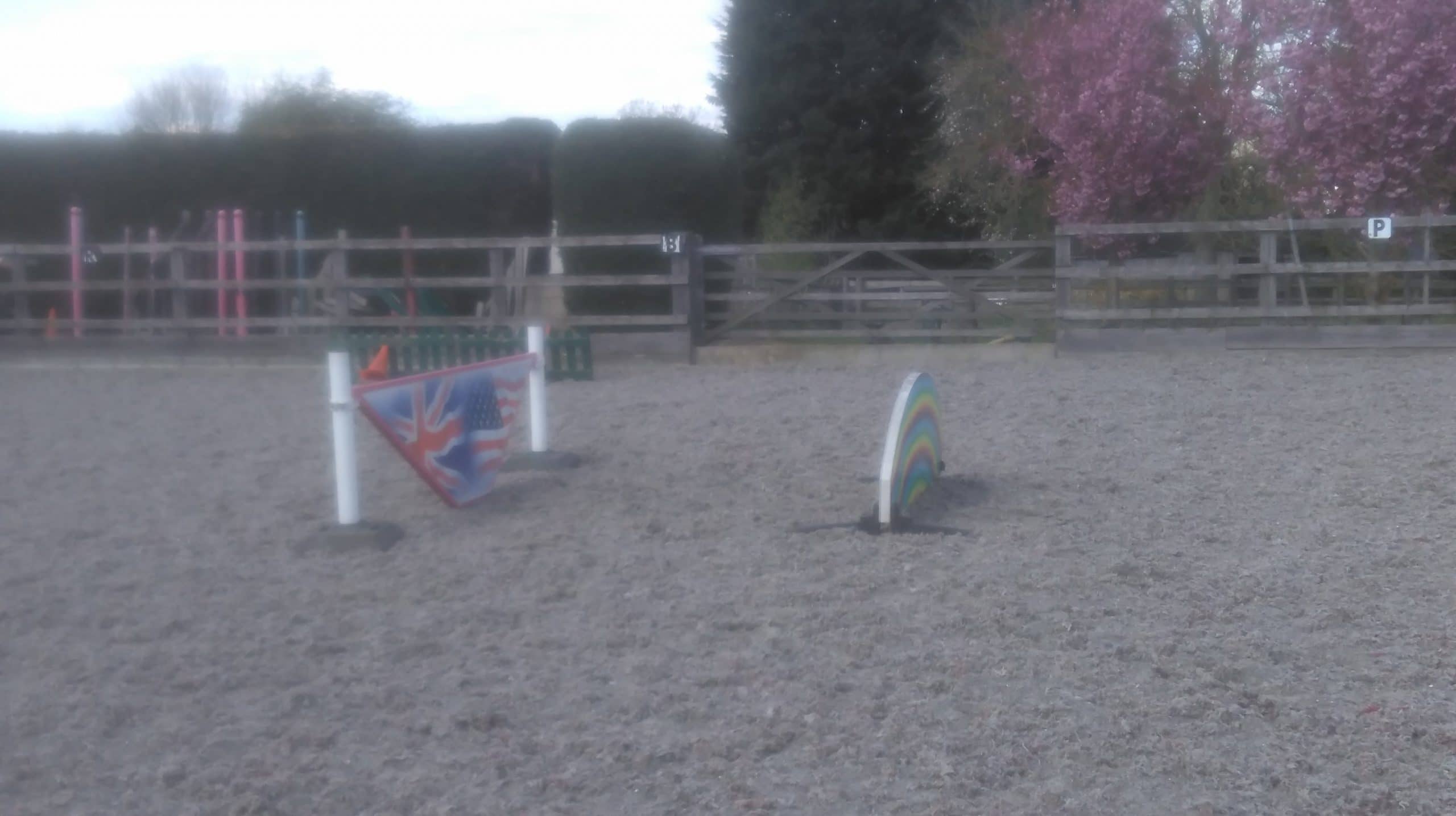 This is where we had our first bit of resistance. I walked ahead of him through the tunnel and he went to follow me before suddenly realising what he was being asked to do and jumped back half a stride. However, after a little bit of pressure and release from the lunge line, he quickly jumped through the tunnel to stop next to me. He had a quick pat, a weave through the cones before going back round to the tunnel. This time he only hesitated for a second before quickly trotting through the tunnel with me. On our third time round he walked quietly through it with me.

We did a few more bits and pieces before approaching the tunnel from the other direction. Again he stopped on the other side of the tunnel and needed some pressure and release to encourage him back through the tunnel, but he quickly followed me and was happy going through from both directions.

I was really pleased with his reaction as when Scottie is worried about something, he very rarely follows you towards/past/over it. Usually he needs chasing/pushing. This could be either from your leg when riding or simply your body position when lunging. But the majority of the time, showing him the way isn’t enough, so the fact that it was enough today was great!

Next I led him towards the raised planks, flame side facing us. I walked over both of them and waited while he stopped to look at and touch the first plank. But once he had had his look he was happy and confident to step over it and follow me, stopping briefly to look at the second one too. We quickly repeated this coming the other way, now looking at the playing cards side, once again with no real issue, just a quick look before following me.

Finally we had a go at backing up around the L shaped poles. This took a few attempts, more because Scottie didn’t seem to quite understand what he was being asked to do. He would back up and turn around the corner, but then expect to go forwards over the pole in front of him. But we got there in the end.

It was really nice doing something a bit different in the sunshine today and I’m really pleased with how well Scottie coped with everything. He was very good even for him, plus I think he enjoyed having to think about something a little bit different for a change.