Yesterday afternoon me and Scottie had our first jump lesson in nearly a year and he was fantastic!

In our warm up we really focused on getting Scottie listening. Lot’s of walk-trot-walk and trot-walk-trot transitions, really focusing on getting him off my leg and working through his back into the transitions. Our instructor, Claudine, who hasn’t seen Scottie in over 6 months was pleased with how much more consistent he is into the contact. So this was really good to hear! She also said that the reason I’m struggling to sit to our right canter as well as our left is because Scottie isn’t really using his right hind as well as he should and to correct this I have been flexing him to the right which has given him an escape route, so I need to focus on getting him straight, almost flexed to the right in order to make him use his right hind properly and actually, as soon as I did this I felt the difference.

Next we moved on to some poles. I drew the following diagram so you can get a better idea of how things were laid out: 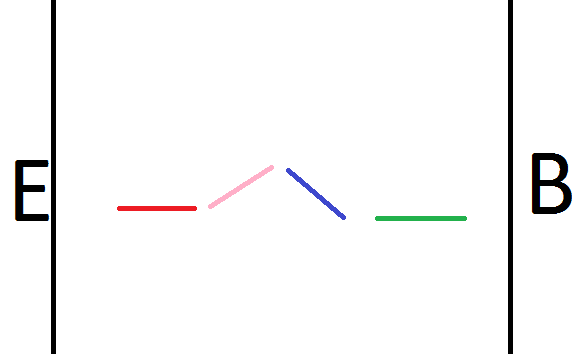 The red and the blue lines were 2 trotting poles, whereas the pink and green were single poles. We started by walking over the pink, which Scottie looked at but went over happily enough. We then did the green, again with no issues. We moved up into trot over both poles before trotting into the red and blue trotting poles. Again, Scottie wasn’t too bothered so we started working in a figure of 8, green, pink, blue, red.

After this we stopped as I wasn’t giving Scottie the best lines into the poles and Claudine said to concentrate on riding away from the poles and use my legs to keep him out and turn, rather than my hands. Our next attempt was much better and Scottie was responding very well to my leg aids and we were getting much better lines and get aways from the poles.

After this, the red trotting poles was turned into a small cross with a placing pole. Now Scottie has a habit of refusing the first jump and trotting into this he backed right off and tried to run out to the left. Luckily I reacted quick enough to turn him into the jump before he stopped. The jump was small enough that I told him to go over it and he stepped over it with very little hesitation, so it obviously wasn’t that scary!

We came straight back round to it again in trot and popped straight over it. We did it a couple more times before asking him to canter into it, which he was happy to do, although we had a few scrambles here and there where he got his legs in a muddle. But he was happy and going forward

After a quick stretch and walk round, the placing pole was taken away and the green pole was made into a similar sized cross pole. We trotted into the new green cross pole and although Scottie hesitated and considered stopping, I was forward thinking enough and looking up that he jumped it anyway. We came straight back round to it again before popping over the red cross pole now without the placing pole. Once again he popped over this happily. We changed the rein and tried both these jumps from the other direction without any problems.

Next we made the blue pole into a small straight. I was told to ride the red, then steady up and go straight over the new blue and then straight round over the green. Scottie cantered happily to the red and I struggled to steady him up and get a good turn into the blue, so we ended up with a fairly terrible line, but I rode forwards and Scottie happily jumped the new jump before coming back round to the green. We rode this once more before putting the final pink pole to a small straight.

I was told to jump all the jumps in any order I liked, but to make the decision on what one to jump next based on how well the last jump went. I decided to tackle the new jump first and popped over it with no problems before popping round the rest of the mini course.

After this we had a good walk round as the cross poles were made into straights and the blue and pink straights made slightly bigger. This time I was told to jump 6-7 times, not jumping anything the same way twice or in the same order. Scottie was going beautifully. We had one hairy moment after jumping the green. I was looking and aiming for the blue, but as we came off the corner, Scottie locked onto the red. I managed to correct him and get him focused on the blue, but at the last minute he faltered, thinking we were doing the pink. This resulted in us coming to a rather uncomfortable stop in front of the wing, causing me to lose a stirrup. A fraction of a second later Scottie worked out what jump we were meant to be jumping and pinged over it, causing me to fly through the air landing uncomfortably and clinging on while we cantered towards the corner. Luckily I manged to stay on and Scottie realising something was quite right and we weren’t heading for another jump came to a stop and let me find my stirrup.

After a quick talk about what went wrong, we rode back past the green and turned into the blue, which we popped over nicely and jumped a few more random jumps before finishing on a very good note.

I’m really pleased with how Scottie went today and I really learnt a lot. I realised that as long as I keep him steady into new jumps and push forward, he should jump them. I also learnt that when he is wanting to go and putting his head up, there is no point pulling. Instead sit back to ask him to wait and if he doesn’t just push him forward. If he gets it wrong, next time round he learnt to listen to me and wait. I was also impressed at how well Scottie learnt to respond to weight aids and that these are far more valuable in asking him to wait in the approach to the jump than the rein aids. I still need to work on my aim, both on the approach and riding away and keeping my upper body up and not going forwards before he does.

So it really was a really productive lesson. I am a lot more confident in our jumping and feel like I can trust him to do his job a lot more than I have been. I just need to trust that if he thinks he knows better and doesn’t listen, that next time he will learn and wait for me.

It's easy to take what you have for granted! I gr

The country is in mourning with the news of the Qu

Flamingo Day! We are forecast a wet and stormy af

This feels a lot more stressful than when the dogs

EquiPepper ·
@TheRubyPepper
Do you warm up before riding? https://t.co/Feh4GF7I5T #horses https://t.co/mm5YcTnRoJ
View on Twitter

EquiPepper ·
@TheRubyPepper
Mochara Belt Bag Review If you regularly compete solo you need to check out this new belt bag from Mochara! I think it is perfect for the essentials while riding. https://t.co/KaRs6TCBRN #horses https://t.co/aiB6E2xHUj
View on Twitter

EquiPepper ·
@TheRubyPepper
The C Word ~ How to treat Colic Colic is an emergency. When a horse starts showing symptoms you need to follow these steps to manage and treat colic. https://t.co/fd7x9hsZAf #horses https://t.co/Va0uNg3lRG
View on Twitter

EquiPepper
Benefits of Hacking There are many benefits of hacking for both horse and rider. From mental stimulation to building confidence to fitness and training. https://buff.ly/3bqWfSY #horses

There are many benefits of hacking for both horse and rider. From mental stimulation to building confidence to fitness and training.
View on Facebook

Cecil has been suffering with suspected grass seeds in his foot causing some infection.

If you have been in the horse world for more than a few years, you have probably heard people talking about navicular with hushed voices. Navicular syndrome was always the end of a horse’s career. In recent years our understanding of this condition has improved massively, meaning it is no longer t...
View on Facebook

EquiPepper
When your friends have moved but there's still loads of grass. So you're looking for them but also enjoying the greeness of it all. 🤣

(They have only moved to a field closer to the yard. He still has 3 horses in fields around him)

Just how close are we to having designer horses?