Some of you may know that I was lucky enough to win a free entry to EquiMind online dressage for April. They are a relatively new online competition company. Note how I said competition and not dressage. They have such a wide range of classes on offer including; dressage, showing and western.

Even within the dressage section there is a wide range of monthly classes/tests to choose from. There is always 1 Intro, 2 prelim/novice/elementary (1 long arena and 1 short arena,) freestyle classes from intro-elementary and fledgling, B and C squad tests. So there is plenty of choice for you and if you are lucky enough to have a long arena, you could easily enter 2-3 tests each month.

So how was my experience?

EquiMind is very easy to use and if you have any questions, they are extremely quick to respond to messages on their social media and are really helpful. There are also lots of ways to send your video in to be judged, making it easy for anyone to get involved.

Unlike Dressage Anywhere, all entries for a class are marked together. I really prefer this way as I think it is more realistic to a real competition. The test sheet is also posted out really quickly after the scoring, which is always good!

Well you might have seen me share on Facebook after filming my dressage test. Scottie was having a particularly unhappy day. It could possibly have been because of the village fair happening a few fields away as towards the end of our session in the school I could just about hear it. He was very tense and just seemed to be looking for what was worrying him. I felt like if I took my legs off him we would end up wiggling away from some invisible monster!

Despite this, we managed to film a reasonably good Prelim 2. It was still pretty tense, but it had some really nice moments in it and watching it back it looked a lot better than it felt. I was a bit shocked by our score though!

We scored 56.72% for this test, which I think was quite mean! At our most recent show we were spooking too much to canter for 2-3 canter movements and still scored 59%! So I think we must have had a particularly mean judge!

When our test sheet arrived we scored mainly 6s with a fair few 5s and 5.5s… very mean! Our highest mark was a 6.5. However, EquiMind do offer free, very detailed feedback for test scoring less than 60%. So although I disagree with the Judge’s scoring, I have detailed comments for each movement as to why I got that mark. So at least I have a reason. (You can watch our test at the bottom of this post and see if you agree with the judges score!)

The main comments were that our steps were correct, but that Scottie was tense/not accepting the contact and not really going forwards. Which is completely true. Despite the incredibly low score, we still managed to win our class and qualified for the August Prelim championship. 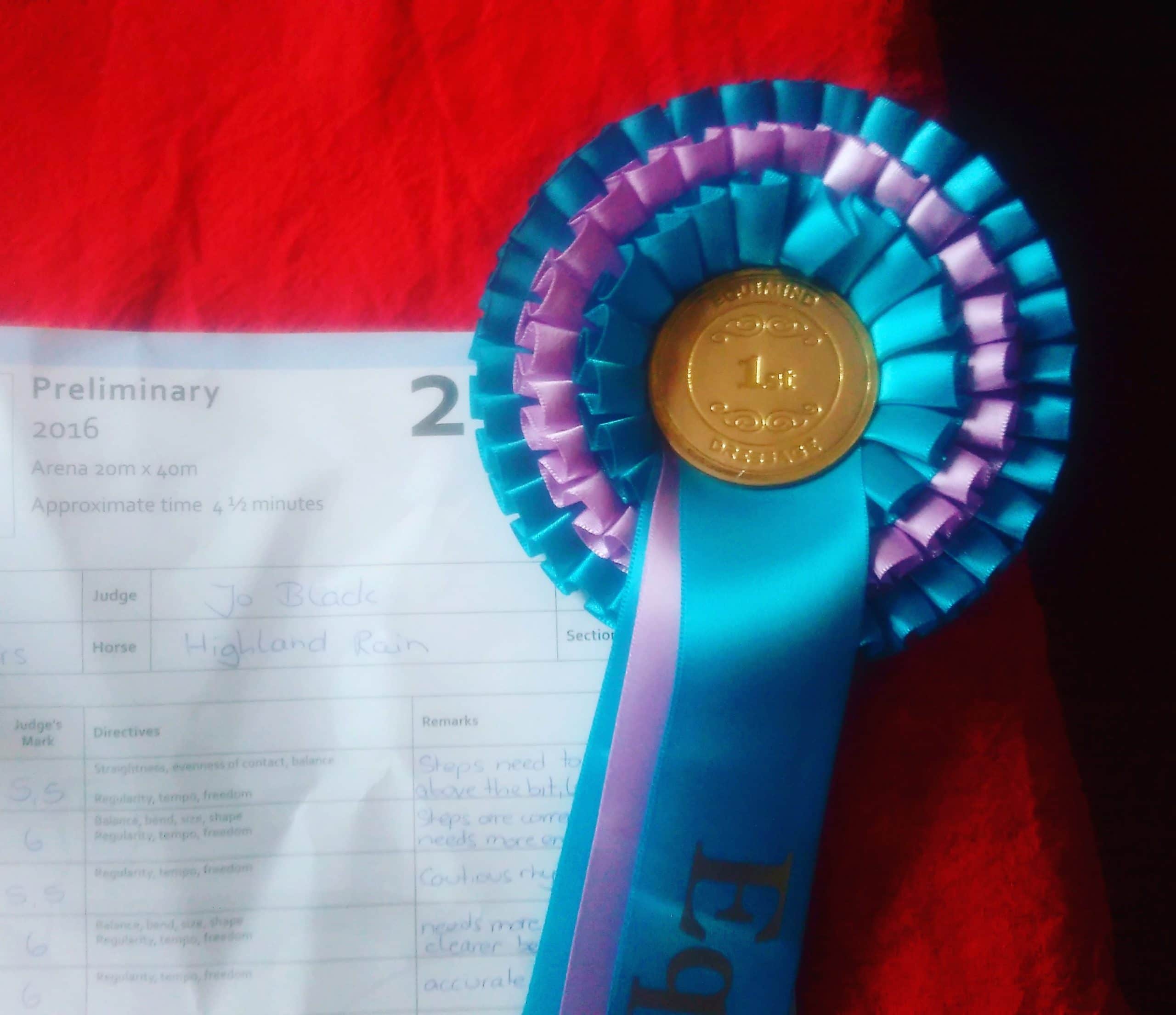 EquiMind is still a very new company, I think their first classes were in February. Because of this, I think there are a few ‘bugs’ which needs fixing.

The first of which is that there is currently no way to see the results for the class. I think being able to see results, even if it is just scores and places, is really important. because I found my score to be particularly low, I would be interested to see the scores for other tests judged by the same judge.

It would also be nice to know how many people are in your class too. So far, everyone I know/have seen who has entered EquiMind has also won their class. Now either only people who are winning their classes are sharing their results, or they are still very small classes, potentially with only one person in the class! Not, that I’m complaining because you get a gorgeous rosette! But it would still be nice to have an idea of the competition.

And while I’m on the topic of rosettes, there are a couple of things I want to mention here. Th first of which is how rosettes are awarded. In the rules they say that 1st is given out for 1-4 riders, 5-8 riders for 2nd rosette and 9-12 for 3rd rosette. Now I know that this is following BD rules/guidelines, but I personally think guaranteed rosettes for 1-3 places would be a better incentive, especially if you are competing regularly.

Finally, this is more of a personal bug bare of mine. As gorgeous as the rosettes are, I’m a bit old fashioned and I like red for first, blue for second, yellow for third etc. Now I know that for most people this wont be an issue, but it upsets my slight rosette OCD.

Would I enter again?

Since I have qualified for the championships I will at least be entering the championship. Whether I enter other classes will probably depend on how they develop as a company over the next few months.