After following Cheltenham festival all of last week and then the snow falling this weekend, I spent my weekend hibernating from the elements and reliving my childhood dreams of being a jockey on Champion Jockey: G1 Jockey & Gallop Racer. I have mentioned this game before in my Good Horse Games ~ Or Lack Of post. This game is available on PS3, Xbox 360 (Kinect Optional) and Wii. I have the Xbox 360 version and love it!

After getting back into this game, (I might have been spending a few hours on it a day currently!) I wanted to give it an actual review, rather than just a mention. I also have a few tips and tricks I might include in a later blog post as while the game is straightforward, some of the features are not well explained and I regularly find myself Googling what a special trait does and how you activate it.

Unlike other horse games on the market, this is not about horse husbandry. It is about making it as a champion jockey. There is no horse husbandry involved in the game at all, with all the focus being on your riding and using your riding skills to win races and improve horses.

However, unlike many car games where they focus purely on racing, there is a bit of a story line to Champion Jockey. You start the game in your final stages of your apprenticeship. You go through the basics of riding and meet your fellow apprentices before making your debut as a jockey.

Once you have made your debut, I feel the game is fairly accurate in what life is like for a jockey. You start off with one or two trainers offering you rides on fairly rubbish horses in low level races. The better you do in these races, the more the trainer likes you and the more RP points you earn. Both these things help you negotiate rides on better horses and better races. Which is how you progress in the game.

Alongside the main story line there are mini extras unlocked when you achieve different things such as 50 wins, your first Graded win or riding a perfect race. These could be a competition against another jockey, being introduced to a new trainer or being offered a new horse in a big race.

What is the aim of the game?

The aim is to become the Champion Jockey each year and pick up as many other awards as you can. To be the champion jockey you have to win the most races that year. There are also awards for best Apprentice, best Jump Jockey and various awards for horses.

How Realistic Is It?

I think this game is fairly realistic of the racing world. Some jockeys are your friends, others are rivals. Stealing other jockeys rides will affect your relationship with them and they challenge you to mini challenges alongside the main aim of getting the most wins.

The graphics on the horses are pretty good. But what I think is really impressive is all the different behavioural traits of the horses and how this affects how well they run. Some like running at the front, some hate being boxed in, some hate jumping, some like close races and all these things mean you have to adapt how you ride the race. 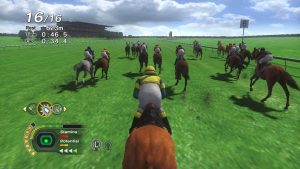 How Easy Is It?

The game itself is really easy to understand. Each week you negotiate your rides, you perhaps do some workouts with these horses and then you race at the weekend. Then the next week starts.

How easy it is to win really depends on the difficulty settings and riding style you select. On the easy setting it is pretty easy to negotiate rides and win on bad horses, which makes it a good choice for when you are first getting to grips with the game. However, I personally find the game gets boring quite quickly on this level and you can only change the difficulty at the end of each year.

There are also options for multiplayer, both online and split screen. I’ve personally not played it online, but I have played split screen with several different people and I think it makes a nice change to your typical racing games. 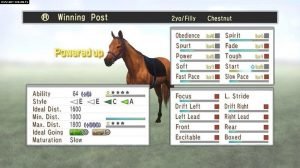 I really love this game and it is definitely one of the best horse games on the market. It is very different in that it focuses solely on riding. Whereas other racing games tend to focus on making money and other equestrian games are broader and include horse husbandry too. But I think it is great.