Home » All Posts » Our Progress » Update on Scottie

I’ve just realised that I haven’t done a proper Scottie update on lots of the injuries and conditions he has had in recent years. So while things are a tad quiet after Badminton and coming back to normal life, I thought I would catch you up on what has been happening with Scottie’s previous conditions. 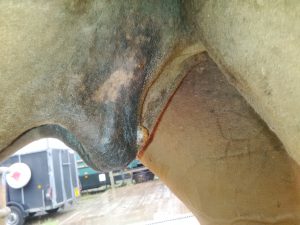 I am very pleased to say that Scottie’s sarcoids have now all completely disappeared! Every single one! Some of you may remember me trying various homeopathic ‘treatments’ to manage and remove his sarcoids such as turmeric. While his sarcoids didn’t get any worse while I was doing these things, they didn’t make them any better.

I’m not sure when exactly the last sarcoid disappeared. But I did notice they started to disappear when I changed Scottie’s diet from conditioning cubes to a balancer. So I have come to the unproven conclusion that not having everything he needed in his diet was stopping his immune system from fighting them off. But once he started to get everything he needed he was able to get rid of them all by himself.

While I will never know for sure why his sarcoids cleared up, I am extremely relieved I decided against veterinary treatment!

A few years ago over winter Scottie developed some random bald patches all over his body. The vet couldn’t work out exactly what they were, but thought the most logical cause was a minor reaction. After the vet saw them they did clear up pretty quickly.

They did make a bit of an appearance again this winter and I am starting to wonder if it is somehow sweat related. Either by a blocked pore or itchy sweat. But I haven’t ruled out other causes. So far it does only seem to happen over the winter months and at times when his coat is starting to change. Either way it is not a major issue but it is something I am keeping an eye on. 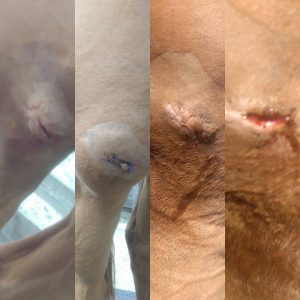 Last Summer we had a particularly nasty injury where Scottie received a kick to the stifle area, going down to the bone. After a shaky few months of fighting infection and discovering there was a lot more damage than we initially thought, Scottie has made a full recovery and was back in full work by December.

Now his winter coat has finally fallen out I am getting my first proper look at the scar tissue left behind. I am pleased to say that there is very little damage to see at all! The skin has healed very nicely and there is no visible scar as such. Just a slight lump under the skin, a bit smaller than a bumble bee! While I can see it if I look for it, I really don’t think it is noticeable at all. 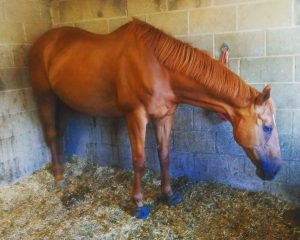 Now the grass has come through Scottie is having more time outside and no hay out in the field and I have noticed an improvement in his cough. If I exercise him in the afternoon after he has been out all day, often we get no cough at all. When I exercise him in the morning or when he goes galloping off in the field, he still does have the odd cough, but it isn’t as bad as it was.

I’m still not 100% sure on the cause of his cough, but I am convinced it is something in his environment, probably hay and/or his bedding. Again I am keeping an eye on this and working on a few things to keep dust levels low. But I’m not too worried about his cough since it is only at the very start of trot/canter and usually only after being in the stable with hay for a few hours.