Home » All Posts » Our Progress » Highland Rain » Scottie the Teacher

Scottie wins everyone over. In just over a month, my partner has gone from being scared of horses to offering to take him in and out of the field and chomping at the bit to have a go. After much thought and lots of warnings and making him promise to do exactly as he is told, I decided to let him have a go. And so Scottie the ex racehorse became Scottie the Teacher (ish).

First things first, we needed to find a riding hat for Damian. I have a very small head, still fitting into childrens hats! So even my older, slightly loose hats were too small for him. After a quick ask around, we decided to get him a cheap but fitting hat from Decathlon. While this hat isn’t state of the art, it is perfect for him having a go. If he likes it, he can always invest in a better hat. But for now it means he has in own hat which fits. 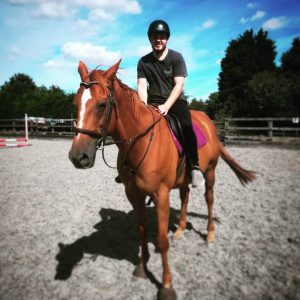 Since Scottie can be cold backed and occasionally quirky, I decided that if would probably be best for him to have a go after I had ridden. This way Scottie should already be loose in his back and worked through any quirkiness. His ride could be part of Scottie’s cool down.

I took advantage of having an extra pair of willing hands at the yard on Saturday and had our final jump practice before our show jumping competition on Thursday. I asked a bit more of Scottie height wise this time and I am confident about us getting a few nice rounds on Thursday, unless they throw some awful jumps at us!

Once I was happy with what Scottie had done and thought it was a good time to finish, I gave him a quick walk round on a long rein before getting off and taking him to the mounting block for Damian to get on. After a quick explanation of how to get on and warning him to be as gentle as he can getting on, Damian was sitting in the saddle and Scottie didn’t seem too worried.

In the past Scottie has been quite anxious about other people getting on. So after a little while showing him how to hold the reins, telling him to hook a finger through the neck strap and showing him where his legs should be, I led him round for a couple of laps. 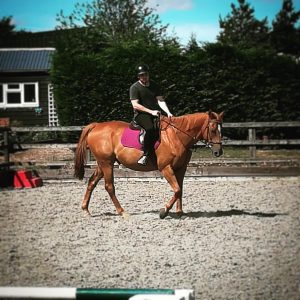 While I could see that Scottie wasn’t 100% happy with a complete novice being on board, he was being very good and calm, so I stepped away and told them to walk around by themselves. Scottie was not a fan of this at all and spent the entire time on a circle falling and turning in to come and stand with me.

But with a bit of perseverance, Damian had Scottie walking almost around the outside of the arena and managed to get a couple of extremely slow and lazy trots down the longside. They even walked and trotted over a half raised pole!

After having our final jump practice before our show on Thursday, Scottie was incredibly well behaved for Damian to have a go too! Not sure he was too happy with someone else getting on (let alone a complete beginner) , but he coped with it all very well! #exracehorse #thoroughbred #teaching

I am incredibly proud of how well behaved Scottie was and how well he coped with being asked to look after a complete beginner. I was also impressed with how quickly Damian took to riding and he is already talking about doing more! Now Scottie will never be a riding school pony and I don’t want it to be his job to teach anyone to ride. But it is nice to know that I can let other people have a go on him every now and then and know that while he might be a bit worried, he will try and look after them.

previousEssential Oils for Horses
nextLike Farm Parent, Like Farm Child: Safe Jobs For Little Fingers To Get Stuck Into *Partnered*