Yesterday we made the most of the bank holiday and having a helper on the ground to set up one of my favourite polework exercises. I have written about this polework exercise before but I think it is fantastic as it can be used in walk, trot and canter by taking different lines. But you can also shorten and lengthen the trot stride depending on whether you go straight over or across the diagonal. 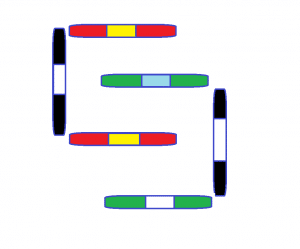 It had been over a year since we last rode this polework exercise. So after I had remember how to set it up, I took it slow with Scottie, walking him over some of the individual poles, giving him plenty of time to see everything what was going on. But despite a minor wobble about there being potties next to the poles, Scottie was very confident and walked through the different lines happily. So after a trot on each rein, I popped him through the different lines, asking him to extend slightly across the diagonal line. He was absolutely perfect! Albeit maybe a tad cocky!

Upping the stakes (and the poles)

Since Scottie was going so well, we raised each pole at one end to make him work that little bit harder. I picked up trot and took him over a couple of the single and pairs of poles before heading back into the main exercise of going over the 4 main raised poles, changing direction each time and asking him to lengthen over the diagonal. Despite knocking a few of them, I could really feel him lift his back and round over them. He also seemed to really enjoy himself, especially over the canter section of the exercise! It was great to feel him so confident over complicated polework exercises again.

Had to jump on this trend! Anyone looking to blac

EquiPepper ·
@TheRubyPepper
The ex-racehorse market explained and where to find one Buying an ex-racehorse was once reserved for former jockeys or brave event riders. As time progressed, thoroughbreds have become popular. https://t.co/jVQgBy3c8M #horses https://t.co/Pei0jEZc4j
View on Twitter

EquiPepper ·
@TheRubyPepper
Horse Owners Biggest Fear ~ Stable Fires For horse owners our biggest fear is stable fires. But what can you do to prevent a fire and what should you do in the case of a stable fire? https://t.co/fIPruLmhfY #horses https://t.co/2pPtw3tLYP
View on Twitter

EquiPepper ·
@TheRubyPepper
EquiNutritive Revive N’ Shine Skin & Coat Supplement Review I was recently sent this skin & coat supplement from EquiNutritive to try as Scottie gets a scabby coat over winter. I am pleased to say I have seen an improvement! https://t.co/Hl1HMIEqWv #horses https://t.co/xluWA86hga
View on Twitter

Variety is the spice of life. This is true for our horses too! Giving them variety keeps them interested & has other benefits too!

Variety is the spice of life. This is true for our horses too! Giving them variety keeps them interested & has other benefits too!
View on Facebook

Being a horse owner, people always assume I am against people eating horse. I have had people try to wind me up by telling me about a horse steak they have eaten in the past. But this doesn’t actually bother me. I think it is okay to eat horse. I’m Not Vegetarian I’m not vegetarian.… Read M...
View on Facebook

EquiPepper
Where are you going?