With Burghley kicking off today with the dressage, you may have noticed that my list of 3 ex racehorses competing has dropped to one. Ben Way and Galley Light are the only ex racehorse combination tackling Burghley this year.

Boyd Martin withdrew Steadie Eddie due to injury/fitness, which is unfortunate. And Gemma Tattersall withdrew possibly my favourite horse on the eventing circuit right now, Arctic Soul. However, it is hard to be disappointed to not be seeing him at Burghley this week knowing he will be making an appearance at the World Equestrian Games (WEG) next week!

After browsing the list of horse and rider combinations so far put forward for the WEG, I have spotted to ex racehorses among them. Arctic Soul, will be representing team GB, as I have already mentioned. And Donner will be representing the USA with Lynn Symansky. Keep your eyes peeled for WEG updates! 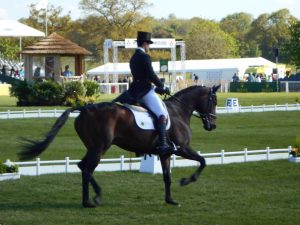 Galley as he is known at home, is an Irish bred national hunt horse. He raced 7 times, twice in national hunt flat races and 5 times over hurdles, never doing better than 5th out of 8 horses. Proving that racing probably wasn’t for him!

They continued stepping up the levels each season, attempting their first 4* at Pau in 2014, where they were unfortunately eliminated. They have since completed both Badminton and Burghley, even placing 12th at Badminton in 2016.

They are yet to get round the cross country at Burghley clear. Hopefully this will be their year!