Home » All Posts » Our Progress » The Boy and the BFG

The Boy and the BFG

When I was at University, a woman at my yard had two young girls who adored Scottie. They would always go and say hello to him, bring him treats and called him BFG (Big Friendly Giant.) Well this weekend, my partners son came to see Scottie for the first time and it was just adorable!

Since we were going up in the middle of the day, I couldn’t get Scottie in for him to say hello without catching several other horses. So I thought I would kill 2 birds with 1 stone and take them out to the field to say hello and do some poo picking at the same time.

Scottie was absolutely adorable with him. We bought some treats up for him to feed Scottie, and while Scottie was a bit nervous about such a small human being (I’m not sure he really understands what children are!) he was very good and very interested in him. Scottie gave him plenty of kisses and followed him around the field like a big labrador!

As good as Scottie was, I would never let him near Scottie (unless there was a fence/door between them) without an adult there with them. This is more to try and stop him getting accidentally squished than anything else! I know Scottie would never intentionally hurt someone, but he is very big and can forget where people are when he is upset or spooked.

I think Scottie gave him a really good first introduction into horses and I’m sure you will see more of this pair in future posts! And just how adorable are they together?! 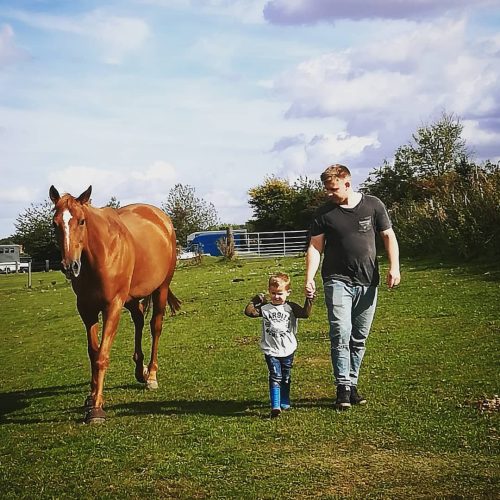