I was really lucky that while studying my degree (Equine Science Breeding and Stud Management) we had our very own stud on campus. Not only did we have our own stud, but the breeding aims of the stud was to breed quality sports horses. This meant we developed a good understanding of the importance of selecting a mare and stallion with improvement in mind and got to work with some really promising young horses. All their horses are registered with the BEF and every August they host one of the BEF gradings, where their foals have always scored highly.

Yearlings in my first year

In my first year, being on the stud course, we were all encouraged to choose one of the young horses to work with. Me and another girl on my course both chose a Grafenstolz yearling each. Both these youngsters had interesting personalities and were prone to tantrums. Due to this, we were regularly grouped together. We would either both be working them at the same time, or we would take turns so that we could help each other with various tasks. My project horse was a filly called Lordships Great Expectations or Maia and the other Grafenstolz yearling was a gelding called Lordships Graffalo or Hermes. 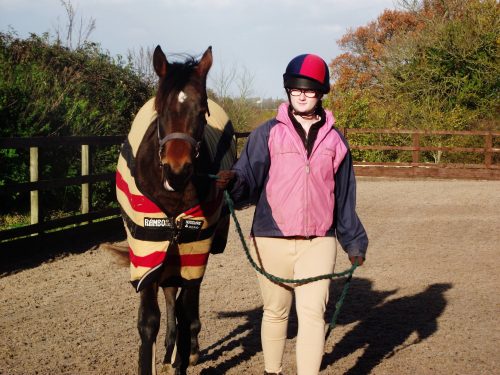 (Lordships Great Expectations & me in my first year at University)

Towards the end of my first year, Hermes had really grown into himself. Watching him trot, or should I say float, across the arena in hand one day was simply beautiful. So it was no surprise that he was sold as a 2/3 year old to be produced elsewhere. In 2016 (just after I graduated) I saw the news on Facebook that Hermes had gone on to come 3rd in the Burghley Young Event Horse Championship! I couldn’t believe it!

Not only did he achieve this, but he is now ridden by the one and only Ros Canter! Yes the same Ros Canter who has just won double gold at the World Equestrian Games! I find it amazing that a horse bred at my University’s stud (Lordships Stud) can go on to be with such a top rider, and hopefully do very well. I love following his progress and hope to see him do well.

I recently contacted Ros and her team about Lordships Graffalo, asking about how he was doing and any plans for him and I got this lovely response back:

“ Lordships graffalo finished his season coming 11th at Osberton in the 6 year old championships. He went very well and is now enjoying a holiday. He is a lovely horse, very intelligent and in to everything at home on the yard. He likes a varied routine and to be challenged otherwise he can get bored and then a bit naughty! He can buck quite a lot in the winter and early spring but then becomes well behaved. We hope to do Intermediates and 2 stars with him next year.”

This was fantastic to hear and sounds very much like the yearling I knew! And I have to thank Ros and her team for finding the time to get back to me. I know they are extremely busy right now and I’m sure they are basking in their recent World Equestrian Games success!