Scottie can be cold backed. When I first bought him, he came with no tack. So I had a saddler out to him ASAP to get one fitted to him. When he took a major dislike to the first saddle we tried on him, I thought back and remembered each time I had viewed him before purchasing he was ridden with a half pad as well as a saddle pad.

So I quickly found a half pad to try under the saddle and there was an instant improvement. He was ridden with a half pad ever since. The only time we tried without was when we were trying new saddles with a master saddler. But after he took a major dislike and I hit the deck hard, the half pad went straight back on! So now we always have his saddles fitted with a half pad. After a few months of using a tattered old half pad, I decided I needed to invest in a nice one. I loved the look of the wool ones and started doing some research to find one. 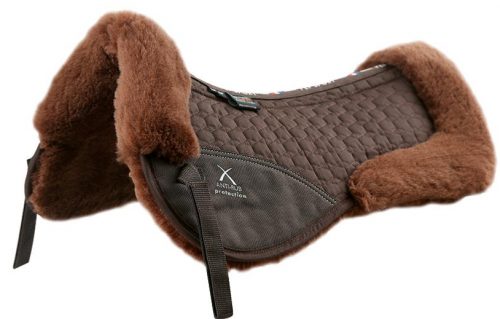 I eventually decided to go for the Premier Equine Merino Wool saddle pad. I liked the design how it sat off the spine and was designed for high withered horses. I think I bought the pad in October/November 2014 and Scottie has been wearing it for every ride ever since!

It has lasted incredibly well. It’s a little bit flat now. But I can take if off, give it a bit of a fluff up or stick it in the wash and it comes back pretty much good as new! I can’t believe how little wear there is on the actual pad itself. At 4 years old in heavy use it looks absolutely fantastic!

My pad was in brown, which matched my tack. However, I felt it clashed with my white dressage square. So earlier this year I purchased the white version of this pad too! I absolutely love them! It is so incredibly tempting to start getting more colours to match some of our other matchy sets… 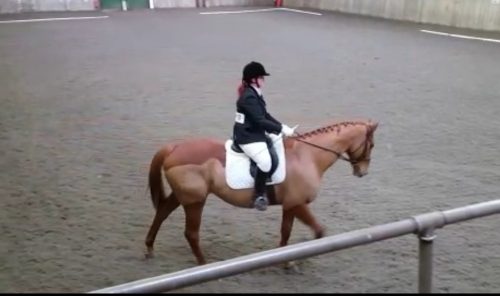 While the pad may seem pricey at £50+ I honestly think they are worth the money purely for how well they last! Plus Premier Equine are fantastic and nearly always have a sale on if you want to get a little bit of money off.

So if you are considering a half pad for your horse, I think you should definitely take a look at this one!