Beware, Beware a Chestnut Mare! ~ The fact behind the myth

We’ve all heard the stories of crazy chestnut mares and been warned off buying one. The amount of tongue and cheek sayings we have about them demonstrates this fantastically! But is it possible for behaviour to be linked to coat colour? And is there any evidence to back up the urban legend of the chestnut mare?

If chestnuts are crazier than other coat colours, this will be genetic and will likely be due to gene linkage. Gene linkage is when genes which are close together on a chromosome tend to get copied across together, so certain traits tend to show together. A great example is pale skin and freckles on ginger people.

Gene linkage also plays a part in breed improvement. While breeding to improve a specific area of an animal, other traits are also carried forward. A good example would be how thoroughbreds have been selectively bred for speed and now the breed as a whole has poor quality feet. This could potentially be due to one of the traits they were breeding for was linked to the genes for foot quality/conformation.

So similarly, a trait we like in chestnut horses, may be linked to a gene for these crazy behaviours. Which may mean over the years we have bred a population of crazy chestnuts! Or perhaps it was even before we got involved and there was some survival benefit for chestnut horses to be “crazy.” 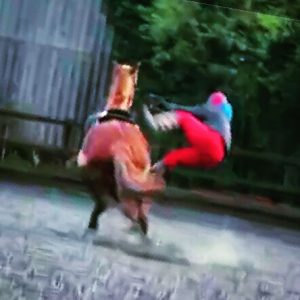 Mares vs Geldings and Stallions

The first topic I want to touch upon is gender. All the chestnut stereotypes I have come across in my lifetime have been specific to chestnut mares, not chestnut geldings or stallions. If we believe the legend of the chestnut mare, this would suggest that the crazy chestnut traits were linked to the sex chromosomes.

While this is completely possible, there is currently no research to back this up. There is not even research to say that coat colour or “crazy” behaviours are genetically linked to gender in horses. This leads me to think that the mare stereotype is due to other factors.

The majority of chestnuts (or any coat colour for that matter) in the industry are mares or geldings. Historically, mares are feistier than geldings, which is believed to be due to their hormones making them more sensitive and potentially argumentative. So the chestnut stereotype focusing on mares could simply be because mares tend to be worse than geldings and chestnuts tend to be worse than other colours.

The second issue I have with the idea of chestnut horses being crazier than other colours is that all horses are technically Chestnut or Black. I have talked about the genetics of coat colour in a previous post, but basically, chestnut and black are the two base coat colours for all horses. Other genes then build on top of these to display different coat colours.

Palomino, Cremello, strawberry roan, red dun and even some grey and white horses will have the chestnut genotype. These other coat colours are not included in the chestnut myth.

But is that because they are rarer? Or maybe they are lumped in with the chestnut coat? Or maybe, there is actually something in the genes for these extra coat colours which overrides the chestnut crazy? There just isn’t enough research to answer these questions.

“I feel like Chestnut Mare and Bay Gelding owners are distinctly different people.”

Despite there being very little research into the genetics of why this might be the case, there has been research into if Chestnut horses do display different behaviours than Bay horses. This study found no link between coat colour and “crazy” behaviours such as; kicking, biting, rearing etc.

However, this study did find that Chestnut horses did tend to be bolder than Bay horses. They were more likely to approach and investigate new objects and animals. Could this boldness have been read as crazy behaviour somewhere down the line? And could mares be displaying this behaviour in a different way to geldings? 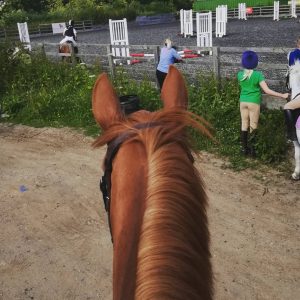 While he isn’t a mare, Scottie is a chestnut and I do certainly see this bold behaviour in him. Despite being a big wimp, he does like to investigate! He likes to check everything out, putting his nose nice and close to it to get a good look at it. Whether it be a scary jump, dog, cat, small child or something new appearing in the field.

He also isn’t a bolter. When something scares him, he tends to stop and watch it before taking a few steps towards it before stopping again. So I feel he is a good example of the bold chestnut in that sense.

Do any of the chestnuts you know match the bold behaviours found in the study? Do you think the crazy behaviour could somehow have been misread?

1 thought on “Beware, Beware a Chestnut Mare! ~ The fact behind the myth”

Had to jump on this trend! Anyone looking to blac

EquiPepper ·
@TheRubyPepper
The ex-racehorse market explained and where to find one Buying an ex-racehorse was once reserved for former jockeys or brave event riders. As time progressed, thoroughbreds have become popular. https://t.co/jVQgBy3c8M #horses https://t.co/Pei0jEZc4j
View on Twitter

EquiPepper ·
@TheRubyPepper
Horse Owners Biggest Fear ~ Stable Fires For horse owners our biggest fear is stable fires. But what can you do to prevent a fire and what should you do in the case of a stable fire? https://t.co/fIPruLmhfY #horses https://t.co/2pPtw3tLYP
View on Twitter

EquiPepper ·
@TheRubyPepper
EquiNutritive Revive N’ Shine Skin & Coat Supplement Review I was recently sent this skin & coat supplement from EquiNutritive to try as Scottie gets a scabby coat over winter. I am pleased to say I have seen an improvement! https://t.co/Hl1HMIEqWv #horses https://t.co/xluWA86hga
View on Twitter

Variety is the spice of life. This is true for our horses too! Giving them variety keeps them interested & has other benefits too!

Variety is the spice of life. This is true for our horses too! Giving them variety keeps them interested & has other benefits too!
View on Facebook

Being a horse owner, people always assume I am against people eating horse. I have had people try to wind me up by telling me about a horse steak they have eaten in the past. But this doesn’t actually bother me. I think it is okay to eat horse. I’m Not Vegetarian I’m not vegetarian.… Read M...
View on Facebook

EquiPepper
Where are you going?