It’s Halloween and what better time of year to talk about something spooky! Since this is a horsey blog, I have rustled up some fantastic true horse related ghost stories for you!

I live in Hertfordshire which is often considered one of the more haunted areas of England. Not only do I live in a particularly haunted county, but where I grew up riding is said to be the most haunted village in Hertfordshire and many of these hauntings are horsey or at the very least horse related!

White Horse Lane was a big part of my hacking growing up. It’s a long windy road which is always strangely quiet and often had a funny smell. On the rare times I was there at night, I hated this road! Even before I knew about the ghost stories. This road was supposedly named after the angry white horse who haunts this road.

During the English civil war, a farmer who supported the royals was beheaded and had his head stuck on a spike. After murdering the farmer, they tried to steal the horse. When the horse would not come the horse was beheaded too.

The horse has since wandered White Horse Lane at night, intimidating anyone who crosses his path. It has also been said for centuries that horses will not put a foot on that line at night. 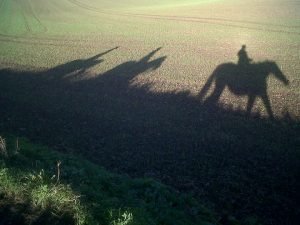 Just off the side of the road, a strange wooden post is stuck in the ground. The surrounding area has an strange feel to it and I can guarentee that if your horse suddenly started acting strange on a ride, you were probably riding past Clibbon’s post!

While not strictly horse related, I discovered this while hacking and everyone I know from the area has known horses to behave differently around this post.

This post marks the final resting place of Highwayman Clibbon who used to rob merchants on their way back from the market. After a failed attack he was shot dead and buried with a wooden stake through his body.

All through the villages I used to ride through, you would regularly hear stories of horses being heard at night. People in bed would her horses calling and hooves clattering down the road. Being such a horsey area, many horse owners panic, thinking their horse has gotten out. But on investigation, there would be no horses there. Or occasionally, you would see a group of white horses.

These horses are believed to have died in a battle more than a thousand years ago. But no one really knows the origins of these strange happenings.

Do you have any horsey ghost stories?

previousBlogtober Round Up
nextA Horse Worth Wintering For!

Good News! Scottie looked a LOT better over the w